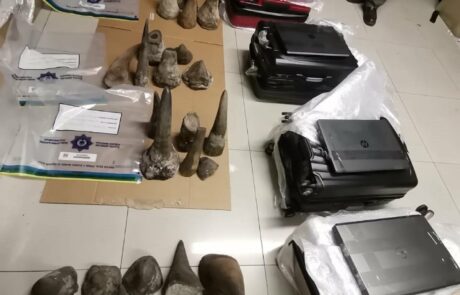 GAUTENG – Gauteng Provincial Head of the Directorate for Priority Crime Investigation, Major General Ebrahim Kadwa is pleased with the latest development into the illegal dealing in rhino horns investigation which resulted in a massive seizure of rhino horns and other equipment in Bedfordview on Wednesday evening.

It is alleged that the investigation team followed up on intelligence received of an on-going investigation related to a Kempton Park case where suspects were arrested and charged with illegal dealing in rhino horns as well as contravention of the customs and excise Act, in September last year.

Upon arrival, police searched the premises and inside the garage, travelling suitcases were discovered, wrapped in plastic ready for distribution.

Police searched the luggage and inside was grocery items and brown boxes as well as scrap laptops.

A 48 year old female was immediately arrested and charged with illegal dealing in rhino horns and contravention with the NEMBA Act.

She is expected to appear in the Germiston Regional court tomorrow.

Major General Kadwa applauds the investigation team for their dedication in discovering the operation centre of the rhino horn trafficking syndicate. “This is viewed as a major breakthrough as the suspect arrested is believed to form part a formidable international wildlife trafficking network”, he concluded.

For pictures and more information, see the article as reported by News24.